In a move seen as more bluster than substance, an Italian official vowed to close all “cannabis light” shops in the country. “A war starts today, street by street, shop by shop, district by district, city by city,” Italy’s Deputy Prime Minister and Minister of the Interior Matteo Salvini said while addressing a meeting of representatives from drug 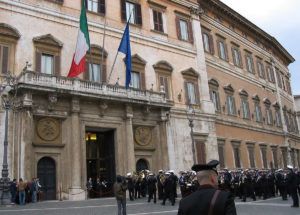 In a move seen as more bluster than substance, an Italian official vowed to close all “cannabis light” shops in the country.

“A war starts today, street by street, shop by shop, district by district, city by city,” Italy’s Deputy Prime Minister and Minister of the Interior Matteo Salvini said while addressing a meeting of representatives from drug recovery organizations.

Three shops were reportedly closed the day after the minister’s declaration, a move Salvini celebrated before issuing a new directive to intensify controls.

Tensions have been growing in the government alliance between Salvini’s League and the Five Star Movement (M5S), rival parties in the upcoming European Parliament elections later this month.

“You can’t get up in the morning and close shops. We should work to have shops opening,” countered Luigi Di Maio, leader of M5S as well as Italy’s deputy prime minister and minister of economic development, labor and social policies.

Paolo Monasterolo, CEO of Estonia-based Adalia Holding, told Marijuana Business Daily that, “being Italian, I’m ashamed to see such behavior from the Italian Ministry of Interior, which is pure propaganda in times of European elections.”

“These thick-headed policy makers” and the uncertain business climate drove Monasterolo’s decision to not grow hemp in Italy.

Because of the separation of powers in Italy, “Salvini can’t just shut down the legal hemp industry,” he said.

“At most, he can allocate extra resources to check the legality of what’s being sold in the retail shops. They’ve been doing that already for a while, so there’s nothing really new here.”

Many industry participants are calling out the announcement as a political stunt, rather than a real shift in political policy and action.

“The closer we get to the EU elections, the more noise Salvini makes for his campaign,” Federico Valla, co-founder of EasyJoint, an Italian hemp products retailer, told MJBizDaily.

“This time, the fearmongering tactic is to generalize ‘bad drugs’ with CBD, in a move that has no rationale.”

“It’s unfortunate that resources are being wasted on this, scaring businesses and investors with headlines, when this legal flourishing industry is creating jobs, research and so many more positive things for the Italian society,” Cappiello added.

While the pronouncement likely will increase confusion among the average citizen, industry participants don’t expect it to lead to widespread shop closures.

While Salvini used the news of the three shops closing to show “he’s a man of action,” it’s not an accurate portrayal of what occurred, Valla said.

Instead, the chief of police seizes products for testing to check compliance.

“If the shops have no other products to sell after the seizure, it’s natural that they’ll close until the testing results are available,” he said.

“If the THC content is below 0.2%, the police will have to allow the shops to continue to operate. The same chief of police has been doing this long before Salvini’s comments.”

The Italian Supreme Court of Cassation is expected to provide clarity about the hemp products on May 30.

Cappiello hopes the court clears up the confusion this created by “clarifying exactly the types of products that are legal to sell to consumers at retail points.”

Valla is also looking forward to seeing the result of the court ruling.

“Once this is clarified,” he said, “Salvini won’t be able to do anything other than intensify controls, but he can’t shut down shops that sell something legal.”

Worst-case scenario – which according to Valla, is “very unlikely” – would be that the court decides that “selling flower to consumers will be banned.”

In the best case, Valla expects that “the THC limit will be increased to 0.6%, which is the current maximum allowed in the fields – like a safety margin for growers – but not in the shops.”

Alfredo Pascual can be reached at [email protected]