Zakti, an Oak Cliff tea company with a tasting room in Tyler Station, is bringing tea and CBD together with a new line of CBD-infused chilled tea that keeps things clean and simple. Owned by Pamela Miller and Janeil Engelstad, Zakti sources loose leaf tea from small farms around the world to sell online and


Zakti, an Oak Cliff tea company with a tasting room in Tyler Station, is bringing tea and CBD together with a new line of CBD-infused chilled tea that keeps things clean and simple.

Owned by Pamela Miller and Janeil Engelstad, Zakti sources loose leaf tea from small farms around the world to sell online and at local coffee shops and restaurants like the Adolphus Hotel, Wild Detectives, Bonton Market and Detour Doughnuts in Frisco.

Miller says CBD pairs well with tea, which has many touted health benefits and is known to promote a “calm, cerebral energy,” she says. The bottled teas are “just another way of getting CBD that’s also kind of tasty,” she says. 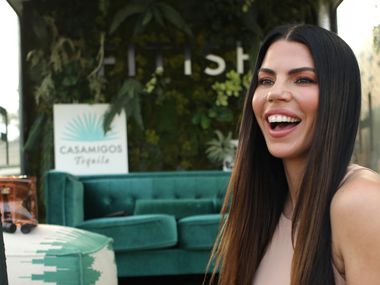 It took some experimenting for Miller to determine the best way to combine tea and CBD. She first added CBD oil directly to tea leaves, “but we found we couldn’t control the amount of CBD and how it was distributed,” after it was brewed, she says. There’s also an isolate powder form of CBD that can be added to tea bags, but Miller also decided against that. “We wanted to stay true to the tea leaf,” she says. “To do the tea justice.”

They eventually found a water-dispersible form of CBD from a Colorado supplier. This form is easy to add to tea that has already been brewed, and it’s easy to control the amount because it disperses evenly. Zakti also has the CBD third-party tested at a North Texas lab.

Miller says they chose to brew the tea hot, not cold. It’s then bottled and chilled in a ready-to-drink brown glass bottle that blocks light from deteriorating the tea. There are only two ingredients: brewed tea and CBD.

Zakti has six varieties of CBD-infused teas to choose from. A loose-leaf pu’er tea ― which is fermented and has a smooth, “not jittery” energy, Miller says ― was the first option. Miller then added a ceylon black tea to the lineup, which “tastes just like Texas tea,” she says. There’s also an oolong, plus three options that are caffeine-free tisanes: a lemon chamomile hibiscus, a peppermint and a honeybush, a shrub from South Africa that’s a cousin of rooibos.

This is the first ready-to-drink beverage that Zakti is offering, and Miller says it’s a way of “serving a population that feels they don’t have time to brew their own tea. But it starts them on a path toward drinking with intention,” and will maybe lead them toward exploring loose-leaf teas and tea culture.

“If you want to change your life, tea can be a part of it,” Miller says.

A 12-ounce bottle with 20 mg CBD is $8 (1 serving), and a 16-ounce bottle with 40 mg is $12 (2 8-ounce servings). There’s also a $4 “energy shot” available, which is a strong steeping on pu’er with 10 mg CBD. You can order online at zakti.com and pick up at the tea room at Tyler Station, or find some selections at Oak Cliff Aikikai, also located inside the station at 1300 S. Polk Street. You can also find the ceylon and oolong CBD teas at Black and Bitter in Duncanville, and the oolong and chamomile at Otto’s Coffee and Fine Foods at the Adolphus Hotel. 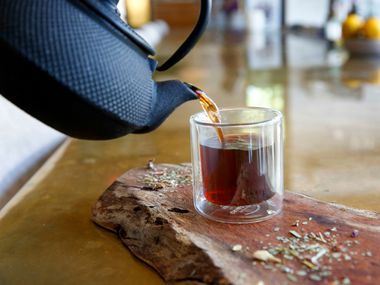