The Associated PressOctober 21, 2019 In this May 8, 2019, file photo, a Yolo! brand CBD oil vape cartridge sits alongside a vape pen on a biohazard bag on a table at a park in Ninety Six, S.C. More than 50 people around Salt Lake City had been poisoned by the time the outbreak ended 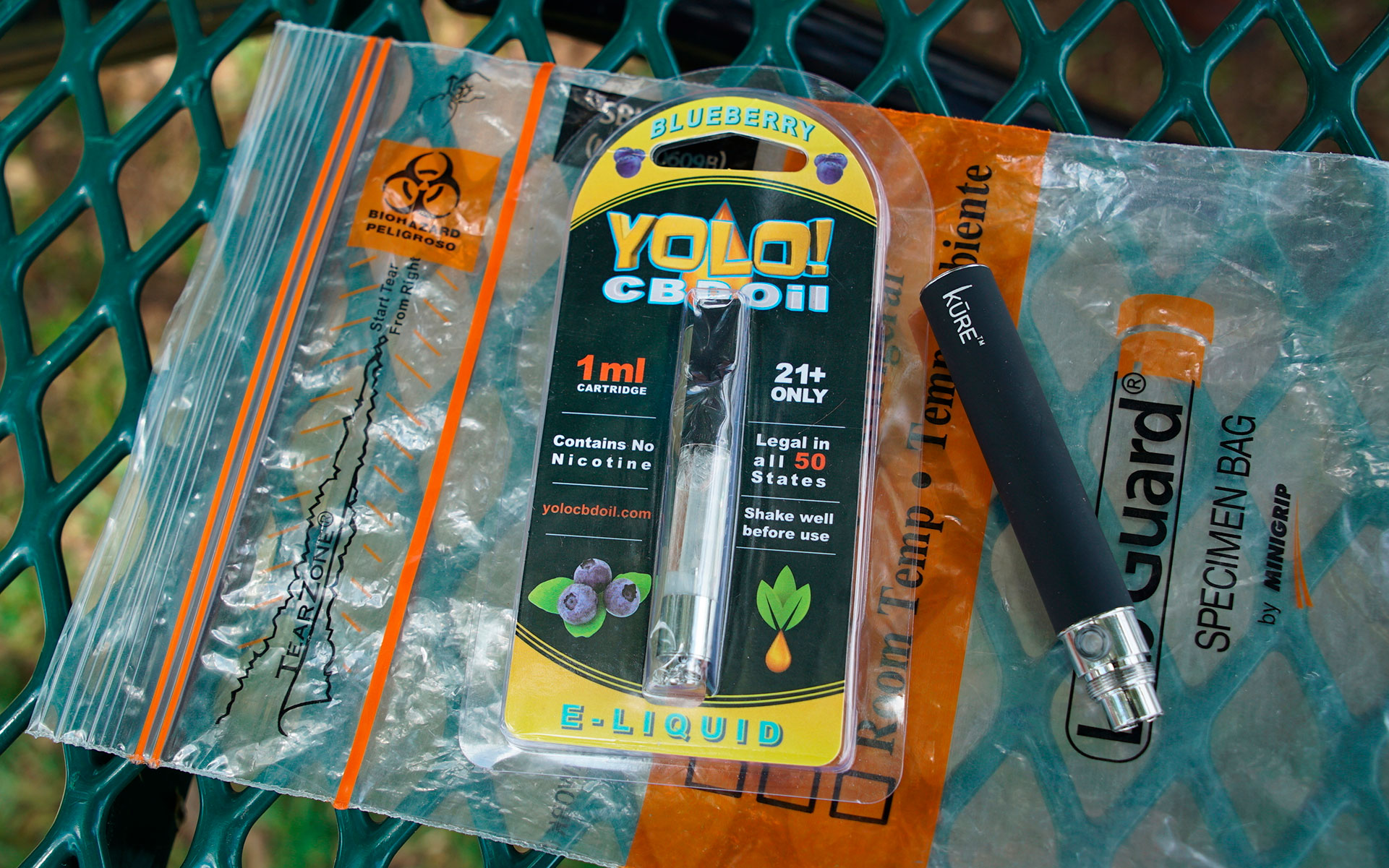 In this May 8, 2019, file photo, a Yolo! brand CBD oil vape cartridge sits alongside a vape pen on a biohazard bag on a table at a park in Ninety Six, S.C. More than 50 people around Salt Lake City had been poisoned by the time the outbreak ended early last year, most by a vape called Yolo!, the acronym for “you only live once.” (AP Photo/Allen G. Breed, File)

CARLSBAD, Calif. — Some of the people rushing to emergency rooms thought the CBD vape they inhaled would help like a gentle medicine. Others puffed it for fun.

What the vapors delivered instead was a jolt of synthetic marijuana, and with it an intense high of hallucinations and even seizures.

More than 50 people around Salt Lake City had been poisoned by the time the outbreak ended early last year, most by a vape called Yolo!—the acronym for “you only live once.”

Synthetic marijuana is actually not a cannabis product. It’s a chemical analog that binds to the same system of receptors. THC, the primary psychoactive chemical in herbal cannabis, latches to CB1 receptors in the brain to produce a euphoric high, and synthetic cannabinoids also bind here, but with a much higher affinity. Synthetics often come with serious side effects not found in real cannabis, up to and including death.

In recent months, hundreds of vape users have developed mysterious lung illnesses, and more than 30 have died. Yolo was different. Users knew immediately something was wrong.

Who made this junk?

Who was responsible for Yolo? Public health officials and criminal investigators couldn’t figure that out. Just as it seemed to appear from nowhere, Yolo faded away with little trace.

As part of an investigation into the illegal spiking of CBD vapes that are not supposed to have any psychoactive effect at all, The Associated Press sought to understand the story behind Yolo.

The trail led to a Southern California beach town and an entrepreneur whose vaping habit prompted a career change that took her from Hollywood parties to federal court in Manhattan.

When Janell Thompson moved from Utah to the San Diego area in 2010, the roommate she found online also vaped. Thompson had a background in financial services and the two decided to turn their shared interest into a business, founding an e-cigarette company called Hookahzz.

There were early successes. Thompson and her partner handed out Hookahzz products at an Emmy Awards pre-party, and their CBD vapes were included in Oscar nominee gift bags in 2014. In a video shot at a trade show, an industry insider described the two women as “the divas of CBD.”

Indeed, Hookahzz was among the first companies to sell vapes that delivered CBD, as the cannabis extract cannabidiol is known. Now a popular ingredient in products from skin creams to gummy bears, cannabidiol was at that time little known and illegal in some states.

The partners started other brands that offered CBD capsules and edibles, as well as products for pets. Part of Thompson’s pitch was that CBD helped treat her dog’s tumors.

By autumn 2017, Thompson and her partner formed another company, Mathco Health Corporation. Within a few months, Yolo spiked with synthetic marijuana—commonly known as K2 or spice—began appearing on store shelves around Salt Lake City.

Synthetic marijuana is manmade and can be manufactured for a fraction of the price of CBD, which is typically extracted from industrial hemp that must be farmed.

Samples tested at Utah labs showed Yolo contained a synthetic marijuana blamed for at least 11 deaths in Europe—and no CBD at all.

Authorities believed that some people sought out Yolo because they wanted to get high, while others unwittingly ingested a dangerous drug. What authorities didn’t understand was its source.

A company with no contacts

Investigators with Utah’s State Bureau of Investigation visited vape stores that sold Yolo, but nobody would talk. The packaging provided no contact information.

That summer, a former Mathco bookkeeper who was preparing to file a workplace retaliation complaint began collecting evidence of what she viewed as bad business practices.

During her research, Tatianna Gustafson saw online pictures showing that Yolo was the main culprit in the Utah poisonings, according to the complaint she filed against Mathco with California’s Department of Industrial Relations.

Gustafson wrote that while at Mathco she was concerned about how Yolo was produced, that it was excluded from Mathco’s promotional material and that the “labels had no ingredients or contact listing.”

Justin Davis, another former Mathco employee, told AP that “the profit margins were larger” for Yolo than other products.

Gustafson’s complaint asserted that Mathco or JK Wholesale, another of the companies that Thompson and her partner incorporated, mixed and distributed Yolo. Financial records in the complaint show Thompson’s initials as the main salesperson for Yolo transactions, including with a company in Utah. The records also show Yolo was sold in at least six other states, including to an address in South Carolina where a college student said he vaped a cartridge that sent him into a coma.

The former bookkeeper also tipped the Utah Poison Control Center about who she believed was behind Yolo, according to her complaint.

Barbara Crouch, the poison center’s executive director, recalled getting a tip in late 2018 and passing it along to the State Bureau of Investigation. SBI agent Christopher Elsholz talked to the tipster, who told him she believed the company she had worked for distributed Yolo.

Elsholz said the company was in California and therefore out of his jurisdiction, so he passed the tip to the U.S. Drug Enforcement Agency.

The DEA offered to help but took no law enforcement action, spokeswoman Mary Brandenberger said. Spiked CBD is a low priority for an agency dealing with bigger problems such as the opioid epidemic, which has killed tens of thousands of people.

Guilty plea to a conspiracy charge

In the end, it wasn’t the synthetic marijuana compound in Yolo from Utah that caught up with Thompson. It was another kind of synthetic added to different brands.

By the time of the Utah poisonings, vapes labeled as Black Magic and Black Diamond had sickened more than 40 people in North Carolina, including high school students and military service members. Investigators were able to connect Thompson to that outbreak in part based on a guilty plea from the distributor of the spiked vapes, who said a woman that authorities identified as Thompson supplied the liquid that went into them.

Prosecutors also linked her to dealers charged in New York, where she pleaded guilty last month to conspiracy to distribute synthetic marijuana and a money laundering charge. The only brand federal prosecutors cited was Yolo.

U.S. Attorney Geoffrey Berman called Thompson a “drug trafficker” who used JK Wholesale to distribute “massive quantities” of synthetic marijuana as far back as 2014. She faces up to 40 years in prison.

Reached by phone the week before she pleaded guilty, Thompson declined to discuss Yolo and then hung up. In a subsequent text message, Thompson said not to call her and referred questions to her lawyer, who did not respond to requests for comment.

While Yolo was Thompson’s project and she was the exclusive salesperson, her business partner and former roommate was involved in its production, according to the workplace retaliation complaint.

Thompson’s business partner and former roommate, Katarina Maloney, distanced herself from Thompson and Yolo during an August interview at Mathco’s headquarters in Carlsbad, California. Maloney has not been charged in the federal investigation.

“To tell you the truth, that was my business partner,” Maloney said of Yolo. She said Thompson was no longer her partner and she didn’t want to discuss it.

In a follow-up email, Maloney asserted the Yolo in Utah “was not purchased from us,” without elaborating.

“Mathco Health Corporation or any of its subsidiary companies do not engage in the manufacture or sale of illegal products,” she wrote. “When products leave our facility, they are 100% compliant with all laws.”

Maloney also said all products are lab tested. She did not respond to requests for Yolo lab results.

The AP is one of the world’s largest and most trusted sources of independent newsgathering.